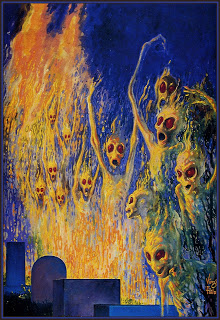 Gearing up to move so will be quiet for a few weeks as i need to move stuff, get boxes, pack, apply for jobs for next term, make any quick cash i can, chuck stuff, sell stuff and school holidays my busiest work time. So maybe i will be lazy and make some monster variant tables for classic creatures. Or whatever.

Tuesday night game party in city so ill just carry all my tables and maps and note so far and use runequest-cities/thievesworld tables book. Will possibly be party base for a while. A post on  weird towers of the ancients might be needed shortly.

Empire and Barron attempting peace with Elves - death to elfkillers! Both sides court new allies from the lost lands and hidden kingdoms

Elves and the Far East control Silver. The elf king has held off humans for thousands of years but if drawn into war could finish it. The elf queen insists on no talks till unicorns protected and unicorn run is made sacred.

Strange peoples of the sea demanded and end to whaling and seal industries of the Barony that provide the cities lighting and light houses with fuel.

Empire is maintaining the gold standard. The Young Emperor still fighting succession wars has designed his gold capped pyramid tomb. Exile Island is a global trade hub and influences exchange rates. Race is on to locate jackpot dungeon hordes worth millions. Dungeonrush! declared by all. Boatloads of settlers arriving. Dungeon claims and explorers licenses are being issued by both sides.

Dwarves did dominate copper but lost it to humans in the dawntime as they did iron and steel and gunpowder since then. They dislike trading with humans due to these losses but necessity is opening them to trade and surface war again. Dwarf tribes disgusted by humans and orcs and goblinoids mixing freely on Exile Island. Dwarves of all types seen in public. Some of the ones who never left and have been here all along dont seem pleased.

Barrons farming yeomen class reaffirmed loyalty. Their elect speaker for the occasion declared the emperor decadent untrustworthy murder fop. Yeomen have no place in the imperial caste scheme. People like them were replaced by professional soldiers a thousand years ago. Most are lawful, many are good. The dont mind the Empire existing just the Emperor. The Barron is strict but fair and gives yeomen special rights in return for their mastery of the long bow and two handed swords. Their elite train like monks.

D100 Insular Islands within and around Exile Island
This could be for any small coastal islands or ones in the huge broad rivers or many lakes and even swamps. You could probably use some results for a mountain in a pinch.