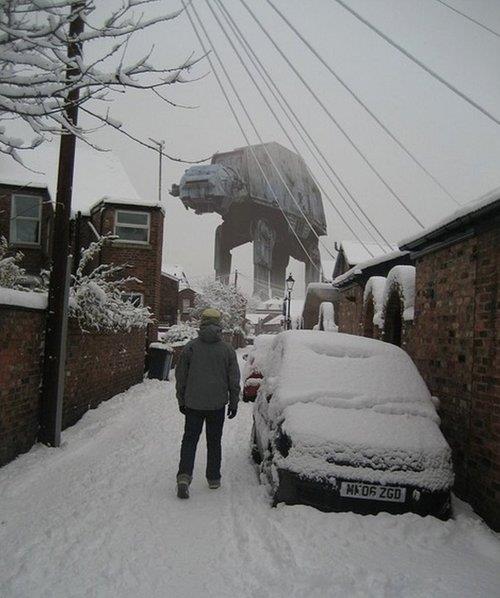 Some thoughts for Tuesday game.

Winter is coming and the Bunker survivors, clones and mutant folk of High Island village prepare in dread.

Their Sleeth allies are seasonally reclaiming the flooded bunker again and stockpiling.

The red death gang bunker of course have not prepared or done anything so they will be raiding and killing to fill their stores.

This year the village want to do something to seriously hamper the gang while they are weak.

The undead dont change their behavior at all but the more active warm ghouls do hibernate. Possible a good time to try something with them as well. The gangs will be sure to face undead being closer.

Gun bunnies hate the heroes who killed and robbed their cheif. They are great winter hunters. Many gamma world fights are more like skirmishes with most combatants fleeing while the most treasure ladened seem to die the most. Sure to leave many enemies alive.

Visibility for non camouflaged targets high. The woods are harder to hide in without leaves. Furs and fire are needed to live, but smoke attracts foes. The party are not exactly great woodsmen and may need some hired men to help and teach them what surface dwellers take for granted. One player has no mutations and could re enter the home bunker if needed.

The adventurers having earned a place in the village are offered recharges of their energy weapons if used in service of the village. Mayor Paul 2375 will encourage them to formulate a plan against the gangs or undead. The sleeth may help and certainly will warn the village from attacks but the village needs to maintain communication lines through gang turf. Their rubber raft only has made around gangs by luck so far.

I'm hoping players will help make a push to improve island life before they leave to serve the beaver king. Under the Beaver king - they will go on missions around the lakes and help the beaver space program. Or at least bring back some nice loot. Legion of gold, Albuquerque space port and Pittsburgh quests will fit in on the way.

I'll probably do an Australian based game soon - with Canetoads and gangs as the main villains. Queensland will be overrun by savage toad warriors in the name of their terrible toad king. Ill have to have some tastefully done indigenous beliefs and contemporary things to parody. Ive also considered merging gamma and DnD into a science and sorcery game. Plenty of time to decide. Baby eating dingoes, croc men hunting humans and humiliating them, kangaroos with pouch gunners, killer bower birds with artifact nests. Ive avoided monster making to date but this may get me going. A human centipede monster would be gross too. Maybe New Zealand really has hobbits living in middle earth theme park.

The gang are a chapter of the Red Death founded by Khan Redhand when he left his bunker on a secret mission with his future wife and a squad. Over the years he has abandoned his mission of seeking a viable starport or teleporter. He has some maps and notes from 20 years of searches in his cache. Most of his original squad died or deserted. He was captured by the Red death and killed their leader in single combat. His gang worked with pirates for a few years and were stranded on high island. They live by scavenging, slaving and trading with pirates. Undead are the main threat to them and they leave the Sleeth tribe alone as they cannot be surprised and they pick off gang leaders in battle. They regard the village as their legitimate prey. Anyone who survives the gangs torture well may be forced to join.

A few pregen gangs to keep my party busy - this is the bulk of the gang and if they are killed the gang is broken and will flee the island. A few other members in patrol and forrage groups exist too. Some run slave gangs and make them find food.

5 member ruin foraging group
this gang loot the town ruins and monitor bunker for anyone leaving. The ex bunker dwellers are weak but great scavengers. May have a pack slave,

Danno 5061 CON 17 HP 51
Old Stock Human with musket and frag grenade & jumpsuit
no mutations due to high CON
Wants to get out of gang if possible, may try and escape or switch sides

6 member raiding group
this gang patrol the zone near the High Island village. If they see a weakness they take it or report to base. They are careful to ambush travelers. May try arson or to blow up a wall section occasionally.

Gelab Goodburger (Glub) CON 13 HP 46
Cyborg with Low light eyes, radio and data jack, IR Rifle, chain, dagger
Gelab report to base via radio and calls support if needed, he craves any tech. The rifle trigger has been replaced with a data jack he plugs into

Pepsee Kolan (Peppi) CON 14 HP 55
Survivor Human with heavy crossbow, 3 frag grenades, chain mail and battle axe
Hates being guard with these lame followers - will attack them if they flee

Wendee Hotdog (Hotdog) CON 14 HP 55
Humanoid Mutant with spear and 3 javelin, soft leather, arrow poison
mutations: Bat Wings, Phobia (fire), photosynthetic skin, hands of power (electrical)
She is looking for a boyfriend to raise her status but her leathery chamo pattern skin makes her hate herself and she likes to skin normal people to make her armour and uses scalps as wigs

Glaarg CON 11 HP 40
Mutant Abomination with a tree trunk club in his claw - crocodile-fish-cow hybrid
mutations: Radiation eyes, gills, teleportation, weight decrease, doubled pain, insanity, heat generation, hands of power
He is moronic psychopath who loves the gang since he joined as bunker dweller decades ago, he is chained to a rock by entrance of their lair

Harry Hellhop CON 13 HP
Mutant rabbit with automatic 5.56mm rifle 40 shot mag, 65 bullets and a spiked baseball bat
mutations: Narcolepsy, antlers, fat cell acumulationx2, confusion
Ex rabbit gang member, red death hope more rabbits will join gang as they eat grass and breed fast, and can be eaten if killed. Harry hops onto people and pins under his blubber if they get close, he is a small arms expert like most gun bunnies. When not fighting he is eating carrots (watsup doc?). He goes crazy if anyone dare call him fat.

3 member tracker gang
These guys cover gang territory looking for tracks they can report to others. If really tempted by weaklings like bunker dwellers they will attack. She hunts food also or helps other gangs hunt enemies. They have a separate lair away from the gang. They all have been lifeleached at start of day when encountered.

Tammy Two dogs CON 16 HP 68 (-6 from life leach)
GM Human with spiked club, flintlock pistol, whip, truncheon, leather armour
Tammy is an expert dog trainer and tracker and the khans daughter, nobody id pure enough for her but her parents hope on finding a GM human husband or at least a mate for her,

Laika CON 11 HP 41 (-6 from life leach)
Mutant dog has no voice box, has no equipment but might grab a weapon on battlefield
mutations: sonic blast, body structure change (bipedal, hands) modified body parts (2d6 bite), fear generation, skin structure change (flammable)
Laika is a violent bitch who hates most other dogs if Tammy doesn't watch her. She obays Tammy who raised her from a pup. She has so far not allowed Boris to mate with her.

Boris CON 16 HP 68 (+2d10 more from life leach)
Mutant dog is quadruped, no hands, no voice box never uses tools just 1d8bite+STR bonus
mutations: Carapace, Heightened STR 21, Chameleon, Life Leech
Boris is jealous of beings who can talk or hold things so he likes to bite hands and throats most. He is made to keep away from gang and sleeps outdoors. He goes first ahead while Laika guards Tammy. He loves Laika and she is only reason he is in gang.

8 member elite guard gang and the Chief
They remain in the bunker but may lead attacks that are safe for them. Stay about the throne chamber looking at treasure and tormenting prisoners. Khan came from a military bunker with his wife 60 years ago.

Dr Gordon 2138 (Doc Gordo) CON 10 HP 21
Old stock Human with duralloy claw, 9mm 8 shot pistol with 2 clips, medkit, 6 x 1d6 healing berries
mutations: empathy, beguiling, death feild generation
Dr gordo is the tribe medic who dreams of starting his own gang - he might use heroes in a scheme and will surrender or play dead if hurt

Kolkut Hambone (Kol) CON 16 HP 89
Humanoid mutant with baseball bat, riot shield, flintlock pistol
mutations: heightened STR 21, mental blast, colourblind, the gamma eye, regeneration, heat reaction, has neon pink spotty skin with patches of grey hair, a bullet head, thickset neck on hunched torso
Kol is a fanatic follower and is first into battle - a canny fighter who uses his mutations well. He lusts after unmutated women and has been told by kahn he will die if touches a GM human woman..

Blag CON 14 HP 53
Abomination stitched into studded and spiked armour, used a parking meter with concrete slab as weapon, not really able to use much else - looks like a hairless pink dog-gorilla-shark hybrid
mutations: duality, heightened STR 21, Insanity, heightened sense (hearing), planar travel
Blag has been the chiefs pet and baggage beast since he resembled a human decades ago. The gang use his planar travel as waste disposal and to banish gang traitors

Garn Metalfist CON 14 HP 51
Cyborg warrior with metalic carapace AC4, all built in - laser pistol (recharges daily), gieger counter, radio, garrotte, hiden in body compartments: duralloy combat knife, frag grenaide
Garn serves the legion of gold in secret but stays close to the khan so reaper can come and kidnap all the purest human stock one day. He offers khan advice and maintains most advanced tech in the bunker. He is looking for a spare atomic cell for the next year to keep him alive.
Posted by Konsumterra at Saturday, November 17, 2012