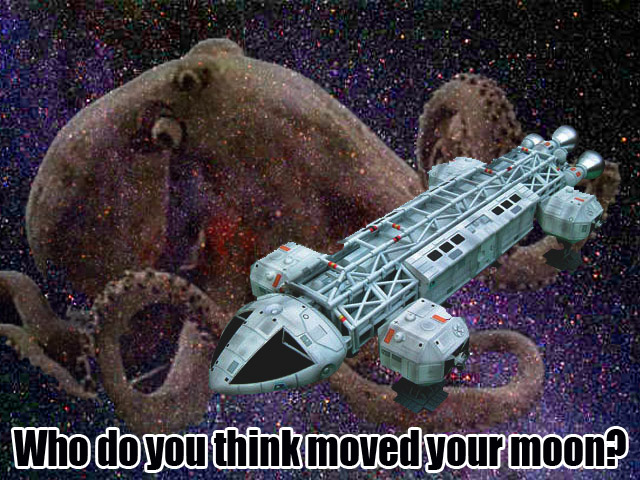 Cthulutech, Cthulhupunk (gurps), Cthonian stars games all had reasonable stabs at space meets the Mythos too. Eclipse Phaze I would argue is the most modern SF and cleverest horror game of all time and worth plundering for ideas. 2300 was best hard science RPG which suits Cthulhu Space gaming. Gurps Space and Ultra Tech and Transhuman space too. Laundry series by Charles Stross use of phone apps to fight monsters and mathemagical science is awesome too. Space 1999 remains my favorite near future SF show and several episodes are almost Mythos. Obviously an explosion couldn't move the moon and anything survive, but the old ones may benefit from gating the moon away. There - biggest hole in show fixed. Cthulhu done it. Early 80s White dwarf uses 1999 eagles in what to me is the first Space mythos scenario for CoC (before it was a miniature catalogue).

Id try and publish all this a bit more completely if I thought anyone was interested.

Later ill post 50+ scenario ideas in Cultists in Space 3
After that ill dig out some of my shadow star campaign and possibly some fiction.

Any better solution for my gravity issues appreciated.

Core text examples
Brian Lumley has in his Borea novels a whole system with planets Iquatha has stocked. One planet a 10th c viking world, another where a glacier of polar bear riding humans barbarians battle cultists. Another has undead cultists toiling at magic for  Iquatha. The god also alters the people he sweeps up into space to survive alien worlds. He will snatch ships, planes and unwilling brides to interstellar space at a whim.

Cthulhu and others have left kin across the stars and have aided cultist like Eibon to flee the Earth. The Saturn Eibon went to is nothing like the one we know. Perhaps it is the dream lands of Saturn instead.

Hodkinsons The Night Land mentions humans went to space and came back finding it inhabited by horrors. Lovecraft mentions Humanity goes to war with the gods then kill themselves when they realize how insignificant they are.

This is a bit more detailed an adventure i ran - its a little flawed but bare bones is there. Drones would have dragged out action more.

asteroid station hab "the Lonesome Nugget" somewhere near Saturn 2247
former mining fuel waystation refitted for being part of a deep space observation array
crew of 7 capacity for 16 - built about 40 years ago - refitted 3 years ago
erratic array use then com blackout - rescue team incoming
the asteroid is tethered to another asteroid and set in a spin to create .4G
they use rotating bunks to give them sleep in .7 G and are medicated and genetically altered to be long term astronauts. Party has never been on the Earth.

The tethered asteroid contains fuel stores, array satellites and old mining junk - it doesn't need to be used much - a cable car connect the two

lost contact - emergency crew sent in with high g liquid atmosphere and crew conditioned for high g rescues. The rescue ship is cramped and the crew are keen to stretch and move.

Hab is a mess as if fight broken out - some blood

mr jinx - on crew manifest as biobot experimental environment and companion pet - locked in pen - identical to mr fuzzy but....mr jinx will eat mr fluffy when out of sight - he is company property and his cleaning duties might reveal sata on possible contamination. Everyone should know he is very expensive and his harm will mean forms and a fne.

investigator psychologist only one with any historical/historical knowledge

Most screens are static - while trying to repair and nodding off tech thinks he hears voices and sees face in with static " get out!" 0/1 SAN - cant find again on playback

Smith is quitest, most distant, ore heavily edited, footage of him madly scrawling for days

What happened?
Mark Smith found documents from old arkham salvaged from an old house he found in library. The journal is from a 20th C maths students research into the witch-maths from Keziah who dwelled in  the house in the 1600s. His san damaged maths research allowed the spirit if Keziah Mason to mentaly explore the ship, probe the AI and turn mr Jinx into a mythos familiar. Things went down hill from there.

The captain was doing eva work when cam died and he disappeared (bumped by drone into space).

Then the AI began to be uncooperative Don was found in medical bay dead and mutilated with shears. Keziah possessed Andre and killed don. Andre was blamed for everything by surviving crew hunted him in struggle and imprisoned him. Sheers and blood found in Andres room - cam footage left as red herring of crew turning on him. Andre witnessed Mark coming in and out of gate and talking to himself and tried to kill him - a shambler came and took Andre away.

Mark pushed Antonia into a gate to 1600s where she was burned as a witch. (A player went through a gate and met same fate).

Cassy discovered she was pregnant to Mr Jinx and overcome with suicidal thoughts - as she began cutting herself. Kezziah took her and traded her to old ones at the dawn of time.

Mark has mostly been studying with Keziah and she has been experimenting with corrupting the ships "thinking engine".

To reactivate AI or use back up?
Study esoteric maths?
Communications with HQ?

Records from earth may take 2 hours to days if historical archive originals requested - this may attract black agents to seize all coms with the Hab. They may not have characters action at heart. May slow the back-up team and claim technical difficulties. Possibly send a warship.

Find another 16thc domestic object - even an apple - tiny - with mould spots and a worm, wooden spoon, spindle, chared wood from Antonias burning.

Mr Jinx
will be friendly and entertaining till investigators bored then goes to business "cleaning"
will fetch, hump leg, beg for food, sit on lap purring, rummage through clothes and laundy, squeak
he can actually gate at will - he is capable of hypnosis and may hypnotize then feed on blood
investigators failing a pow vs jinxs will see only adorable - company approved genetagged corporate biopet. Mr jinxs may lure someone into Mark Smiths room to be gated away. Players may try to kill or imprison him - he should easily escape to attack later, bigger and more horrible. If players relax about him he might make sexual advances. Kaziah can sense vaguely what jinx does but may be only vague.

Big Stuff
Andre found in fetal position shaking covered in unknown bioloical slime. Covered in claw marks and sucker woulds, blood loss, shock, catatonia. Acts better when drugged. Psychoanalysis sees totally abnormal brain activity - possibly getting a static hate message on brain scan equipment - Andre tries to get them to trust him - he doesn't know what he has done. Will turn psychotically homicidal with any object possible laughing and screaming like a banshee if freed by anybody.

Anyone checking out the other Asteroid might find Kezziah blows the tether, the cable and the mono-filament might destroy the rescue ship. Players might need jump rolls to get to main hab.

Mr Jinx will be not bothering to seem to be a biobot anymore and monsters out to siz 6. Will try to hypntise and drink or attack hand of any weapon wielder. Will escape if harmed and regenerate and try again. At 0 health he will fade to another dimension to heal. Magic damage takes longer and blood to heal. If investigators kill him twice he will remain with kezziah from then on. Possibly someone finds a video of Cassy and Mr Jinx in a compromising position - while watching something of course should attack them. 0/-1 SAN (unauthorized use of corporate property!).

By this time even fairly careful crew have infected their own ship through com systems. Algenon now hostile ready to cut coms and use ship to kill crew - totally overwritten by Kezziah as another body for her. Killing her will let Algernon reboot (?). Kezziah-ship tries to drive crew to the nugget. She could even turn on rescuers or fly elsewhere and leave the hab to Jinx, Mark and the investigators. She wants a bigger Ai and a new cult - and possible future missions for investigators. The party could nuke the asteroid but that would make trouble.

Mark Smith
Eventually mark returns surprised to find anybody on the ship - he has spent months between the 16th century the old ones and  now back to the ship to use the computer. If he sees players he will retreat into a gate or summon a shambler. It is possible to prevent him from binding the shambler and be killed by it. He has a magic knife which assists in summoning shamblers. He also has an alien tech biological translator he traded with the old ones that looks like a slime covered trilobite.
He alone is not too difficult to kill - he is only a fledgeling sorcerer.

Kezziah
She can escape any time but what she really wants is more footholds in time and space so escaping to the investigators home base is more important than the Hab or mark. She is superhuman and will risk fighting till she is wounded. She often uses domestic household objects as weapons. She has spells, summonings but is not really concerned with the Hab or characters - escape to civilization is her number one interest. If she destroys this one she knows another will come.

Mr Jinx can fend for himself and recover any non magical damage easily (he is a great little one).

Wrapping up
If only a one shot adventure - investigators could defeat her in combat. Perhaps given a clue she seeks their ship they could use a demolition charge. Removing all the gate equations from ship and database will help. Killing Mark and driving off jinx all help. Marines will arrive in tw days after coms loss. Letting her escape will save them but earn less san. After getting to HQ switching AIs she will crash the ship into a hab killing thousands. Future games may feature investigators chasing her as she revives dead sorcerers, awakens old ones, makes gates, starts cults and more. Eventually she will regret letting them live.Of course the best SAN outcome is to drive her off and destroy the gates.

When i ran this one player was gated and burned as a witch, all had injuries. Took 4 hours - i was impressed they didn't immediately suspect jinx seriously. Oh and the marine ex captain (I ran as NPC) had a secret mission to do whatever to protect government interests got shot by his second in command who was really sure his superior was mad (but he was just following orders by trying to kill party). He also could have abandoned party and stole their ship. Mark was killed by an engineers laser cutter. Mr Jinx and Kezziah were trapped in the past. Survivors were taken on their first visit to earth. One was arrested for stealing marks data and kept in a secret asylum, another was recruited into black ops org by force. Other survivors were just sworn to secrecy and monitored forever, one a drug addict. Yay victory.

Characters have no reason to believe hostile government black ops might have any inkling of the mythos. Any biopets they meet from then on will fill them with dread (or arousal?).

Posted by Konsumterra at Saturday, November 10, 2012