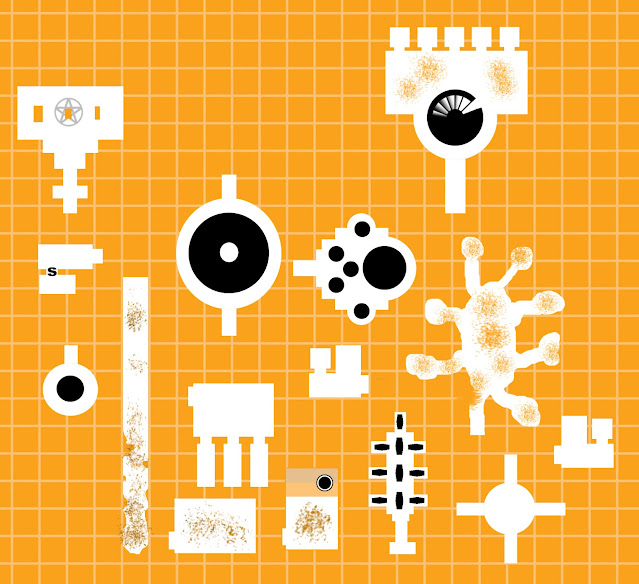 Was reading about a mistaken dinosaur fossil from a poorly considered assemblage with a triceratops a tyrannosaur and ankylosaurs. Yes, I see the appeal for a seven-year-old and that's cool enough to stat up this mistake.

The image above is my current The Orc Prince Module. I unusually wrote up rooms first and now mapping rooms. I might try some alternate configurations when done and have them as bits a GM could cut out and reassemble or ad to some other map. A strange new kink in my process. A few years ago I barely wrote up any adventures and Patreon got me writing almost a hundred in a few years to some stage. I still consider it all experimental and I'm glad I can still try building these things in new ways. This current process might be good for underestimating the labour of some of my plays with megadungeons that that took double or quadruple the estimated labour. The threefold flyer format and one sheet dungeon pdfs were written to fit. Anyway, I have a recyclable coffin and circle-stairwell-into-a-pit graphics. Broken foot and lungs being manageable but today a reminder of health swings affecting my moods and neediness for interaction. Thanks to ppl leaving comments recently!

Omnisaurus
Neutral Altered Prehistoric Animal
AC +10 HD 20 Attacks 5 Move
Bite 3d8 Hornsx2 2d10 Claw x2 d6 Thagomizer 3d10 Plastron Bash 3d6
The dinosaur can vary its attacks each round especially if any attempt to blindside or trap them or to favour unwounded body parts. One option used when closing in the first round is to charge so horns do double damage then taking a nip a claw scratch and a tail thagomiser wack. They are about as smart as a monitor lizard but mostly fearless.

The terrible combination and basic body shape of a t-rex, the spiked plastron and tail thagomizer of an ankylosaur and the horns and shield of a triceratops. Made by some deranged serpent folk wizard in some war, a few eggs can be found in serpent folk cryonic bunkers. Part of a long-forgotten arms race in a war against amphibians long ago. Many Omnisaurs have a clan tattoo of some forgotten faction. Occasionally some have additional modifications or may be ridden by a serpent folk wizard

Varients
1in6 has lowlight vision
1in6 amphibious warfare variant with webbed finger and 1/2 move water, hold breath for 10 minutes
1in6 Burrowing variant has 3 move through soil or 1 through rock
1in6 has a serpent folk wizard on a saddle with a fireball wand or other weapon
1in10 has two long squid-like tentacle arms (3d4+grab each) and chameleon skin for hiding
1in10 has a jewel that can shoot a 3d10 laser once per round with a range of 500m
1in12 has regeneration from troll blood 3 points per round, tend to have tumours and chaotic evil from pain and desire to inflict it on others to feel something permanant
1in12 has a cabin with four serpent folk two with wands one pilot one commander
1in12 has two black powder 6d6 naval cannons with 300m range over its shoulders mounted on its plastron with six lizardfolk gunners and a serpent folk commander
1in12 also has pterodactyl wings that fold out to impossibly large size for awkward flight
1in12 fully marine version crosed with kronosaur with flippers slaps of d12 instead of claws
1in20 has a detachable pod on its plastron that can deploy a dozen lizardfolk, a shaman and a leader. These lizardfolk have composite bows and spiked maxes and nets
1in20 has a warp gem in its brain allowing it to blink or teleport with a rider

d12 Encounters1 Miners have been finding strange basalt ruins in a coal mine, then miners vanished and have called for adventurers to find the beast of the caves. Some say it has huge footprints but others report small footprints and man sizes the miners cant agree on which
2 Passing through for night a swamp town with lizardfolk skins nailed to the wooden walls. Locals boast about exterminating lizard folk in the tavern and show a collection of heads. Then all hear a strange roar and screams
3 Locals by marsh report lizardfolk have become more organised and advanced. Some speculate they found a strange serpentfolk basalt bunker. Adventurers have been requested to help troops mop up these troublesome lizards
4 A mad wizard has been paying for captured swamp thunder lizards or dinosaurs she calls them. A few adventurers have got rich and who cares why this crazy witch wants dinosaurs.
5 Authorities rounded up a snake cult and have captured a filthy snake folk wizard. Authorities have kept in a secure manour house to interrogate yet fear its sly charm. It seems quite sure there a rescue coming. Adventurers with exotic experience have been asked to help interrogation for good easy pay
6 Shepherds near the marsh say some sort of strange dragon has been eating sheep and want the governor to send adventurers and knights. A reward for the dragons head has been offered. Many would-be heroes are in town all planning to find it first. They won't believe adventurers would not hunt the beast and get competative
7 A strange giant stone egg has been found in a quarry and locals have come to gaze at it. Once a crowd gather to see the egg a wizard unpetrifies it to see what it was. Was a Omnisaur drop pod that was petrified by a toad wizard with an adult hungry beast inside
8 Dwarves and Tako octopus folk have been mining a coastline with a large iron rig. Various fishy folk and mermaids tried to warn them but the rights awakened a serpentfolk colony. Feeling under threat they release their
9 Lizardfolk have been digging up something in the swamp they found, some sort of huge living creature
10 A strange wizard has been offering to swap spells for a un certification magic and has been offering scraps of ancient serpent folk texts on metal plates. Who knows who he really is and where he gets these texts and what will he do when he has this magic?
11 Some say a strange new sea monster has been menacing travellers and the strange beast has a metallic pod on its back with marine iguana folk and a sea serpant folk wizard inside
12 SOmething has stampeded lots of brontosaurus from the swamp and they have cause lots of damage and easily trampled humans trying to stop them. SOmeone has to go into the swamp to find out what has them scared