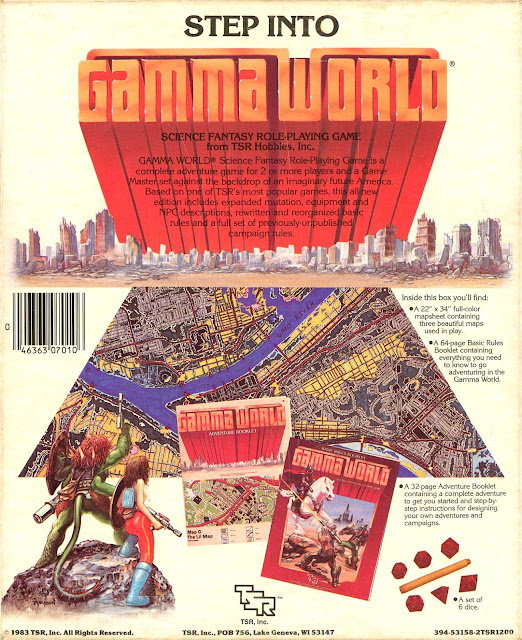 After I got red Elmore dnd box set and among my friends, we had the older bx books and a purple box and we failed to notice many differences we were so high off the possibility. I went to the UK in 84 and at Hamley's London found the Gammaworlds Box Set. I failed to do any of my set homework I was so enchanted. In various regional game shops, I got all the modules and dm screen. My friends were a bit less enthused but we had a go and it was fun. It occupied lots of my imagination and Mad Max, Boy and His Dog and Damnation Alley and Escape from New York were films I loved.

I maintain this is the prettiest and best box set ever. While many love 1st ed the 2nd ed has what I think was TSR's best layout and art period. When I could only play 1 RPG when I got back into gaming about 2012 and had to choose dnd or this I wrote Planet Psychon.

Recently I started getting some modules from Drivethru to complete my collection and I intend to get most of it even later ed adventures. I also like the d20 hardbacks for trying to rationalise the setting, taking it seriously and being gonzo. My main issue with this ed it was a bit padded out. Hoping to get the monster book yet as I have Players and GM book. I also love Mutant Epoch, Darwins World and Iron Crowns Death Valley Free Prison (very mad max). Would like 2nd ed GM screen but might just settle for the PDF. I plunder all these Games using my Elfmaids&Octopi homebrew D&D and Planet Psychon.

MCC which came out well after Planet Psychon had some frightening similar ideas but was a disappointment. Lacked a world, monsters and lots of touches that made DCC amazing. I appreciate the modules and art but I would find some of the gonzo DCC adventures would work better (hollow earth one, purple planet etc.

Anomalous Subsurface Environment is one of my favorite settings and I ran It a year with S3 tacked on the end (which wasn't gonzo enough).

So here is a little wander down memory lane of these Products.

So the 1st has its charm I don't deny it. @nd ed brought in Elmore art and Illustrated every monster and is a well layed out game. Third version I might get as it has some OK ideas but is a broken game I find more complex but consider it a heroic effort.  The box cover art is brilliant even though it made us want cyborgs which the rules did not cover (Mutant Epoch cyborgs are great).

So The 64 page rulebook from the day of simple and concise writing Is a gem. It has mutant characters and animals, monsters, robots, androids and cryptic alliances. The d20 version padded this into 4 or so books and struggled to fit in the original cryptic alliances. The 4th ed compatible DnD version I loath. Card gimmick where players can spend more than other players is an utterly repulsive WOTC shitstorm. Treated as a comedy short term gimmick game as a novelty from dnd. It was very silly, the wold lacked any point, it abandoned the lore and was played for laughs. I'm fine with the existing humour in the game and I prefer the grimdark sf dystopian humour of 2000ad comics.

Then theirIs the campaign map and adventure book. The city map could last a long time in play. The larger area with more detailed communities and factions offer even more play. Id says these two items are a year of play. There is a funny theatre AI that locks you in and tries to get your party to act. A lil bramble maze and a rooftop mutant vulture stronghold in detail to find on the character's trial of adulthood adventure. There are paragraph entries for interesting city locations to design yourself and a larger regional map with descriptions of towns and the continent map. The 1st ed or Dragon (?) presented a continent map showing Cryptic Alliances as nations. The adventure book goes on to conduct a campaign, status, adventure design and tables. I will totally run this as Planet Psychon.

Mechanically it is a DnD variant with MS instead of wisdom harking back to when Wisdom was really will power and piety (ad&d earning bonus spells). Wisdom has changed in every edition of d&d and currently, it is a mess (old wise folk are the most alert and observant?). You get a Hit Dice per Con point. Pure Strain Humans got d8 and interact with tech best. Others got a d6. Plants not available as players 2nd ed. The Con score vs intensity of radiation or poison was awesome. Status replaced weapons and basically as you climb in your cryptic alliance you get some benefits but most of my players were not interested in post-apocalypse civilisation they just wanted ruins, cool guns and blowing up stuff. I liked monster stat rolls presented which dnd should have done.

So the adventures I also have fond memories of. I will detail the first few here.

GW1 Legion of GoldThis is my favourite Gygax book. For the 1st edition, it builds a region around a town and sets players on various missions climaxing in the legion HQ. The towns offer examples of settlement building. The art include classic era TSR art crew like Otus & Diesel. The adventures in order are fighting a bug colony, shelters with glowing undead from Dog and his Boy and ancients who awake only to die from modern air. Dragon had an article about late humans had a Genetic Stabilisation Treatment that explains why pure humans are un mutatable and superhuman. A good fix.  Then a marine base with androids and a sub ride. Then the Legion base. New monsters, the legion description and lots of oldschool cartridge gunpowder weapons familiar to modern humans. I used these for DnD for years. A brief description of various towns and two random treasure tables. Its a complete campaign is good for several sessions.

GW2 Famine in FargoYou start as village kids on a quest for adulthood. Boxed text creeps in here and a detailed hexcrawl. At some point, you get captured by Badders and escape their burrow. Why badger folk didn't get in dnd ill never know. So you find an automated chicken factory taken over by cyclops chickens with heat rays. The AI wants chickens killed (I sorta feel sorry for them) and a radioactive meteor affecting local crops for reactor fuel. It is a lot tighter and goal-oriented than GW1but it is lots of fun and has some humour with Badders worshipping a badger sports mascot and the chickens are awesome. I'd have them escape to be the local orcs. Tim Truman, Easly and Jim Holloway art. The party rewards include end of the crop failure and robots delivering meat from possibly sentient chickens. Lots of new monsters, robots and some mutations. Easily expanded or even merged into the box set adventure. Good campaign start before a major ruin.

Strangely the original GW1&2 i got recent years were in better condition than ones I bought from shops. I traded my set away in 85 to buy more cthulhu stuff and regretted it for years so I was happy to spring for another one when I had an income. My players were onto star frontiers, MERP and Cthulhu and lost interest in GW so trading it seemed ok at time. Anyway I got GW3 & 4 from drivethrough RPG.

GW3 The Cleansing War of Garik Blackhand
This has a setting based in a tribe in Yellowstone who have included many indigenous customs and dress. Has probably the best pregens with cards and portraits. Great horrible monsters and new tech. The adventure has you killing racists which never gets old. This feels quicker and I would like notes on using the park more. Map has lots of room for you to expand setting but I like the native folk killing genetic inbred scum vibe. SO lots of potential but a bit more would have been nice. Maybe that pro typesetting and more art and design was a step from the hyper dense older TSR.

GW4 The Mind Masters
At the time I thought this was a bit horrible. Players have a bit of a hexcrawl (not lots of detail) then find an ancient mental health facility run by an AI. You could stick it with any other area really which is good even in Pitzburke. So players lose lots of autonomy, suffer and some cannot use their abilities. Usually, a formula that sucks and annoys players. But now I think it is genius. You're a mutant you say? Tell me about your mother. The AI doesn't believe in stories of war, mutants or anything outside. So you get locked up, interrogated, explore the hospital and escape. The AI also sends you on simulated tests where you actually control android bodies and lack power. I've run this from memory in other game systems/genres. GM can have lots of fun running this.

I think the first two are the best adventures. A Pitzbuorke sourcebook detailing buildings and locations would be nice but I guess my patreon adventures and Pscyonnstuff would do that fine. GW2 could be stuck in these ruins also.

I did get the Treasures of the ancients book second hand with the map and a copy of Gamma Knights which lets you mod armour and use hardpoints on battlesuits and is also a gammaworld wargame. I like atomic battlesuits vs tanks, death machines, muskets and black powder cannon. Will get more - lots of fun ideas.

Also see my Gamma Aeon Book under downloads page or the gamma stuff page.
Posted by Konsumterra at Wednesday, March 11, 2020