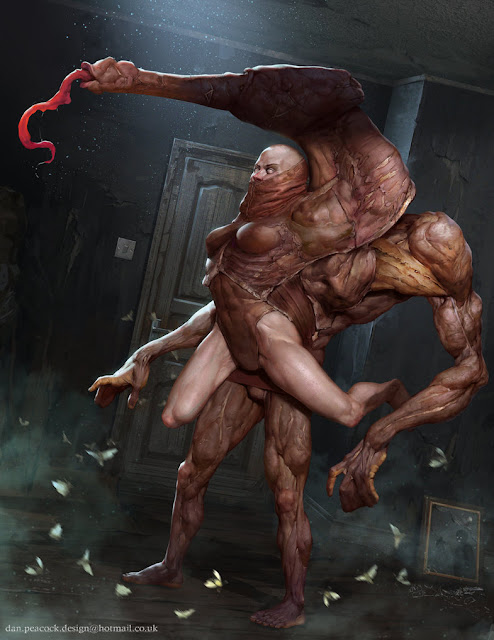 A final point I need to deal with before I just settle down to my Xor manuscript (mostly need spells and monsters revised) is religion on Xor. For characters and for communities. I don't necessarily want to stick to the conventions of old or new dnd or LOTFP. Plenty of these sects could serve more than the basic classes. I will think about non human Xor cults a bit for later. Dark Albion Chaos cults might work too.

Outsiders bring there own gods and beliefs up the the GM. Usually outsider religion is that of a world Xor is intruding on. In games I ran England 1642 explorers brought Roman Catholicism, Puritanism, Church of England, Satanism, Witchcraft and Scots Presbyterianism to Xor. You could have outsider bring any historical or fantasy religion to Xor. Some of these end up being taught to locals and surviving. Within a few generations they mutate into something new. Things unfamiliar to Xor might be replaced to local variations. Clothing and weapons might be replaced first. Metal and wood on Xor are alien. Clothing on Xor is coarse and woven from hair or made from leather. Bone weapons with teeth for edges attatched with gut and sinew are standard. A god on a wooden cross would bee weird to Xorians. For missionaries this is part of the challenge. Less literate religion like shamanism or animism or ancestor worship is engulfed into native Xor religion much faster, even within a single religion. You could include any religion from history or fantasy setting. You could modify them into a weird xorian hybrid faith.

Elemental cults are followers on classical alchemical elements sourced from the primal elemental planes. On Xor they are alien powers and not part of the native philosophical viewpoint. Most Xorians can only comprehend earth as dung or rotten organic matter heaps. To Xorians the elements are parts of Xor or byproducts not the constituents. Elementalists might be clerical priests or wizards. They might cooperate with other elements or be rivals. Elementals seek more influence and worship. Cultists seek power and influence over the world. Most Elements are fire, earth, water or air but exotic hybrid elements like vapour, ice, lightning, crystal, darkness are less common but also exist.

Necromancy on Xor is a aberration. Most Xorians are repulsed by undeath, death and decay and see it as a breakdown of Xorian nature and a part of disorder and chaos. The fact some demons are utilizers of undead and death magic makes necromancers even less popular. Xorian magic of flesh, blood, bone and animus are seen as tolerable. Outsider necromancers are fascinated by Xorian magic and keen to steal it's secrets. Necromancy cults can be scholarly wizard sects or priestly death cults.

Demonic Chaos is one of the major problems on Xor and ranges from blatant obvious invasions of demons to cultist secret incursions spreading corruption and confusion. Demons seek to use Xor to create a new demonic plane to span legions to conquer and destroy the multiverse. Cultists seek to aid demons to gain wishes, power, revenge or just desperation. Some chaos cults don't realize the full implications of their actions. Others seek wishes or power. Some realize that demons intend to abuse them and ruin the world but seek to enter the demonic ranks on the base level. To be reborn as lesser peons and work their way through luck or merit to greater ranks. Demonic chaos cults can be priestly clerics or wizardly.

Spirit Cults are worshipers of spirits who negotiate with many everyday supernatural beings. They may have power but not as all powerful as gods. Spirits have hierarchies and some are royal and leaders over lesser spirits. Spirits surround everyone invisibly in the spirit world. Xor is the world spirit and sometimes upsets great spirits of other worlds. Spirits once walked the waking world more often and are ancestors of many tribes. Some spirit cult clans forbid relations with certain spirits. Spirits no not require great sacrifice or temples but they dont object to them either. Many cultists have shrines in their houses and bury ancestors beneath their floors or even eat fragments of them in rituals. Spirits are less jealous and clusters of spirit shrines might be located together.  Shamen, priests and wizards might all deal with spirits in different ways.

Hospitallers of Xor are a order who provide medical care to the faithful and innocent of Xor. They also act as military medics for crusaders and demon fighters. They are well liked and set up clinic shrines and hospital temples far and wide. They also protect the weak and sick and do take up arms and armour against those who prey on them. They don't often start fights but will hunt and kill dabblers in the necromantic arts.

Inquisitors of Xor seek enemies of Xor especially from outsiders. Some lead angry mobs, some work in military units some work in disguise all trying to root out secret cults and alien cults. They are sometimes mistaken and overzealous but the veteran ones have magical means to find the truth.  Mixed feelings about the inquisitors exist because of their over zealous history. Despite this evil reputation they do stamp out some demonic and troublesome cults. Inquisitors may fight and many orders are long rivals. Cthulhu cults might be a good alternative to demons. Some petty gods might be on Xor too.

Children of Xor are a common cult of peaceful worshipers who serve and protect the common folk. Found in villages and small communities and try to let them live in harmony with mighty Xor. They will fight in self defence or to protect the innocent but will try to resolve problems with talk or running away if possible.

Hierophants of Xor are philosophers who seek to understand Xor with study. They
Mystics of Xor are monastic order mostly monks, nuns or clerics who dwell in fortified towers and monastaries where they train in esoteric meditation and copy books of knowledge. They fight to protect their property and working folk from harm ans sometime go on pilgrimages seeking knowledge and exchanging books with other monasteries.

Heretics of Xor are a unpopular but thriving cult. They welcome cannibalism, inbreeding, mutations and outsiders. They kidnap and convert members with sleep deprivation and starvation. Some sects are worse than others and some of their practices are in fact common, just more celebrated in public. While not chaotic and demonic they are prone to being corrupted. They publicly celebrate taboos as the means to enlightenment. Many camp around moths of Xor they feed sacrifices too. Many sects live under the surface of Xor and often trade and breed with things considered monsters.