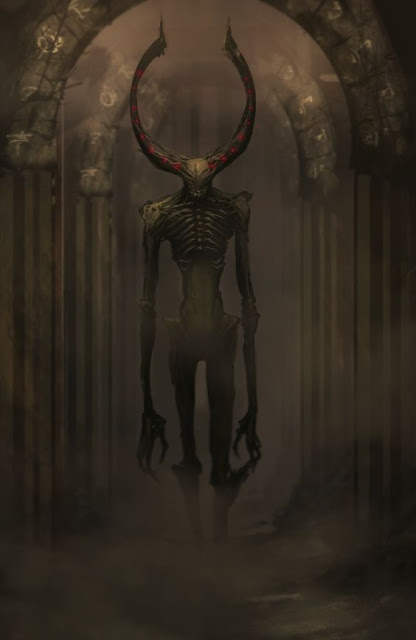 When travelling the hells - gatekeeper devils and ferrymen are prone to demanding things to pass. While most devils are prone to receiving bribes devils on duty have specific orders and fees for mortals to pass. Trying to pass without permission sounds alarms and more devils are called. Illegal gatecrashers will be hunted by dedicated teams of devil prefects, trained monsters or even mercenary demons or other entities. Each such unlawful passage sends another group of hunters. If caught or better still if the gatecrashers surrender themselves to the diabolic court. The court will inflict a greater penalty or a additional penalty but if the crashers cooperate they may be shown some leniency.

If one team of hunters cannot arrest the escapees then another is sent. If that fails diabolic nobility will meet and debate how to stop the escapees possibly sending a large military force led by diabolic nobility or awaken some ancient primal evil entity or even even request the gods send something to punish them. Once the gods are defied some kind of demigod or divine monster will be sent and if that fails the gods will begin to kill family members, curse kingdoms and unleash disasters on their families and homelands. Surrendering to the gods mercy at this point means a quick death.

The fees of goods, moral tests and challenges are made to be unpleasant and to wear down the resistance of

Hunters are specialists who often carry chains and whips and like to howl fiercley and rage acros the land hunting their victim and harassing locals as to their prey's warehouse. When they have caught their victim and have them in chains they torment and humiliate them all the way back to their lord who sent the hunters or possibly the diabolic courthouse or possibly guild hall.


d12 Hunters of Hell
01 A greater Devil with a dozen minions
02 A greater devil riding a dragon
03 A unique greater devil with a score of lesser devils
04 A unique greater devil leading a dozen erinyes
05 A fallen noble of hell seeking atonement with a dozen devil followers
06 A pair of pit fiend siblings
07 A pit fiend with a score of lesser devils or hellounds
08 A nighthag riding a nightmare with a d4 followers
09 A pack of spectral hounds led by a spectra devil
10 A score of mercenary lesser demons
11 A dozen mercenary lesser demons led by a greater demon
12 A greater mercenary daemon, slaad or fallen angel

Costs of passage need to hurt somebody. Either the traveller or to make the traveller harm someone to degrade their moral status. Stuff that doesn't seem so bad should actually be worse. The devil testing the travellers will often show visions of the consequences of your choice. Devils will encourage you to justify your choice reminding you only chaos would randomly decide with no effort. Devil might also suggest you try to atone for your evil choices after you leave hell or to accept your fate and join hell. Atonement might include making holy quest to gain good gods forgiveness of find where in world tests effected and try to fix the problem.

Some requests act out scenarios seemingly in the real world. These could be a familiar place at home, a distant land, a dreamworld, alternate word or different time period. Whatever easiest for the game master but consequences affecting your campaign setting is more effective.

d10 Quick Cost of Passage Types
1 Sacrifice - some kind of victim or goods given to the gatekeeper*
2 Quest - may include transporting the person elsewhere just to fulfill the quest
3 Moral Dilemma - forcing the traveller to make a choice between two bad moral outcomes
4 Terrible Gamble - choices or gambles with all outcomes poor
5 Unholy Bargain - accept a the least worst outcome
6 Trial by might - battle for right to pass but foes might have own motivations
7 Defeat evil custom - strange custom forces unpleasant decision
8 Twisted love - diabolic twists of passion to torment through love
9 Lie for the Prize - forced to lie or deceive someone
10 Take on a burden - bear a terrible curse
*Body parts sacrificed are also parts of your soul, cannot be healed even if reincarnated will be missing body parts