Cloud Castle Cave Clan vs Black City of the Old Ones 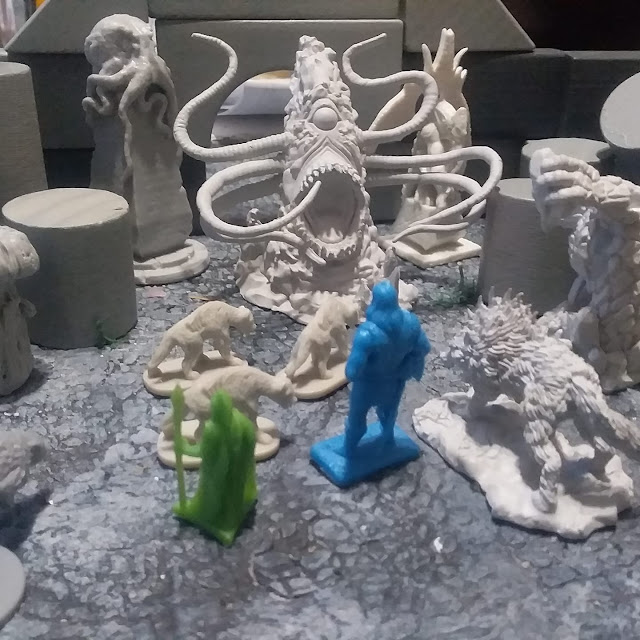 Todays game we had 3 players which were lucky. Gota +1 and a -1. A few floaty players are handy thank you, Hugh.

Last game they battled a clan of frost giants and their hill giant and ogre minions. The party now had brought the whole tribe of cave folks to live in the castle. The Mountain Clan they had adopted only had a few rules and was full of mongrels. A bunch of human flood refugees and survivors of tribes they mostly wiped out, and elf scout group, halfling clan and a wizard school. 60 orcs who lived in the castle when they took it from formations are allies of the party and most recently got the frost giants slave orcs to rebel. Now the mountain clan in a cloud castle where people all dress with shiny ancient coins decorating themselves who grow food and kidnap animals and breed griffins. Some have brought up the tribe could all be orcs in 2 generations and most of the party didn't care. Several lawful good heroes debating that they should kill the night hag in their old cave and quash her cult among the tribe (former snake and spider tribe women)

So this game the sky castle floated up the valley to the great melting ice wall in the northern mountains where a city of the old ones is located. The heroes had been in an outpost before and were wary. Party all 12th Lv embarked on the ice wall and looked at the stairs humans and giants had carved over centuries. Into area cultists left evidence of camps near when a savage barrel-chested thick skilled,
a brute with a hat made of three skulls (biggest up to smallest painted black) came out to parley.

The Tribe Heroes Today:
JB a sky giant youth having a grand adventure
-with his giant pet dogs 3=6HD
Dallas a warrior hero of the sky lord master of the Red Ziggurat
-with his priestly attendants, wife and a new orc hero
Hugh greatest cave wizard in the world!
-has a school of 11 wizards operating without him of stag clan

"why you here?" the throwback asked.
"We have come to rid this place of you and replace your kind," said the Sky gods priestess

The brutish shaman deciding parley was over at this point turned back as horde of ogrish huge cave maniacs poured into a flaming magic death. The wizard fireball was followed up by the warriors and the giants and their followers charged. Several ogres were vapourised and many injured and their shaman backed off and healed himself. More ogres poured out and the heroes beat them into huge ox like corpses. Their shaman was blinded after healing himself again but he cast a zombie making spell which worked as he was walking on corpses. The party mopped up the ogres and looked about the cavern inside. Several connected caves and passages inside and a camp that showed the ogres had been human until they drank potions. Last of some chaos cult human-like cave folk race.

In one cave where they found a stone sphere that killed lower life forms but could melt rock. Was a fungus filled room the giant filled with flame walls to purify and Migo hiding flew out and the party squished them good. Explored a while finding a gate to hell any level machine. A gem burning attribute booster machine with some unknown side effects but broken, a rusty disc that summoned swarms, a sphere that lets you automatically hit a foe for a permanent CHA point, a mutation ray, urn that can make severed heads talk and a bunch of weird stuff. Found a petrified shoggoth with 200HP they beat on and wizard played with controls to petrify it so the party could debate how to all backstab a monster full of eyes then went back to just killing it with controls again. One room was full of treasure chests like the party had found shiny weak metal in ancient boxes before. The boxes turned out to be time but aggressive shapeshifting shoggoths awaiting to ambush cultists. Realised the city was a dimensional maze and when they found an airwell to the surface they climbed out. The human slave niches and the brain storage room of cultists from the age of monster kings were the worst.

Heroes considered they should go to hell and show the monsters there a thing or two. They met a Barbed devil which summoned in another but they squished them both with two of the three heroes paralysed. No battles too awful after the stone shoggoth but the items and machines and rooms with eggs and formless spawn of tsathogua babies in urns were a worry.

Outside they got to study their relics. Debated using the relic with auto-hit for a CHA point to hand around followers or charmed evil people. Its as if items of prehuman evil magicians could tempt you into doing bad things. There are several random stat improving or cursing monoliths  (In Dyson's Red Ape Valley) they had discussed letting followers could use and mathematically some would come out enhanced for a month too. The tribe in their fancy gold clothes farming food, using metal and dogs and a giant floating castle have become a bit haughty and starting belief in their divinity and supremacy to other tribes. Current plans are to keep sacking the old ones in north mountains and later the dragon cult and the death cult on the coast. Some talk now of going to hell or an elemental plane to hunt. 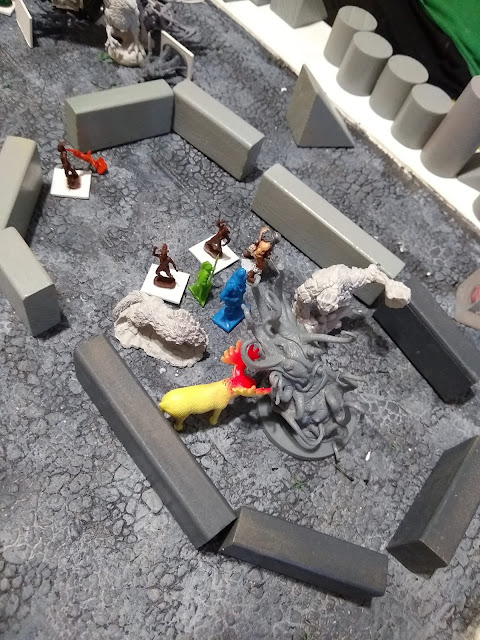 This was the petrified shoggoth room battle.

Wizard has discovered his familiar now competent with a form of a stag or a floating eyeball plus had a 8HD earth elemental that was like having a suicidal obedient warrior pal! The fighter and the giants are hurling around lots of damage every few rounds.

I'm using my Stoneage Sorcery book, Realms of Crawling Chaos for Labyrinth Lord for the best lovecraftian treasure tables and Sandy Petersen's Cthulhu Mythos or 5th edition book to help me out generating this dungeon on the fly. Also MM 1st ed sorta.

I joked about switching to immortal storm in a future game to my players. Free on drive-through recently as a companion to cyclopaedia ed basic dnd it has rules for playing through more levels of stuff with more dice to roll to do stuff.

Posted by Konsumterra at Sunday, November 15, 2020