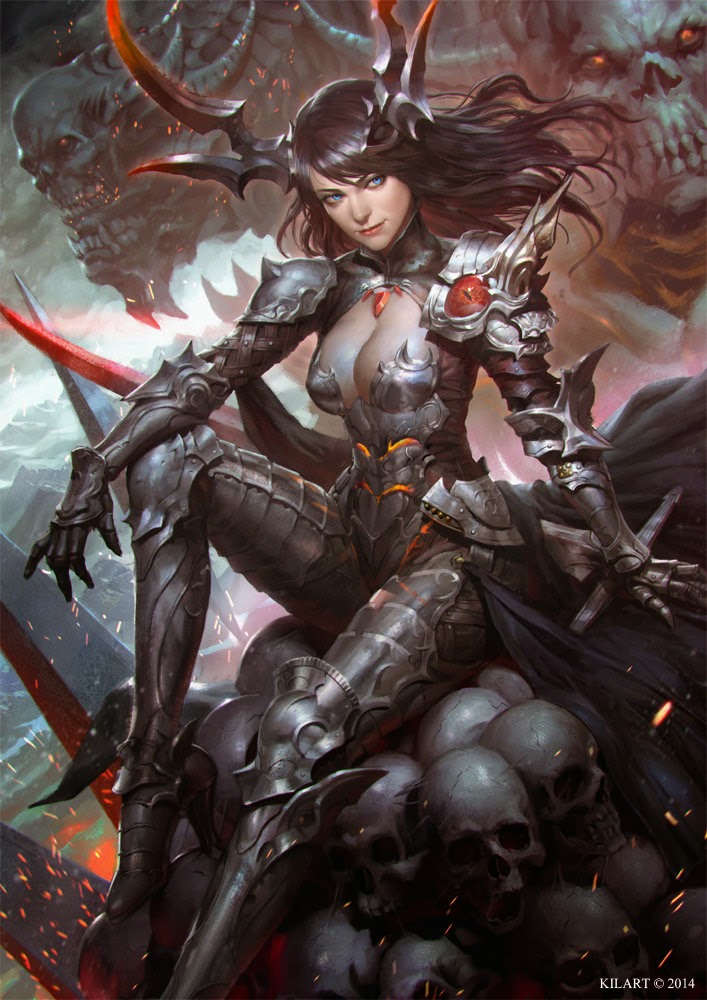 So party up to usual downtime antics in city when Acula had a knock on his home door. It was a battered dark elf they had nor seen for almost two years. Explained he had been lost in underland while visiting his clan. He and Acula the archer had some beef over women in the past but were both greedy and mean enough to overlook this.

Caught up with Nahme the angelic relic bearer in her church. The octopus lad who had joined them was with her.

All went to drink and discuss future treks. They all hated Chandaru but reluctant to return to Hobgoblin Halls. Perhaps it was too organised and responded too efficiently to invaders. Elf found his old follower a drug dealing bugbear (party call him a Drugbear). He also had hiss riding Spider.

Nahme's wannabe follower Thomas the cleric quit as she had not made him a follower despite his loyal service. She said he wasn't good enough. Party still not interested in raising dead followers with healing credit pool at temple. Thomas stomped off angrily.

All seemed keen to visit the underland wastes with god relics and ruins deep under the island.

Did some shopping to prepare and decided to deal with the powdered women in jars party had found in necromancers lair. Aculard had opted for the one that detected as evil and sold to his necromancer buddy who bought all the god awful crap he found. The octopus lad though this a good del and sold his jar too. Acula bought some explosives and tried to use his secret police card to get a discount. The Dwarfs replied they had secret police friends too and could get a low ranking noob like him killed. So he paid full price and extra to forget his rudeness.

Nahme took hers to temple and opened and found a atractive noble girl of 800 years ago. He smashed jar freeing her from being a slave and gave her a job looking after her new estate. Did keep her from her husband though.

So all marched north and into the border lands, Found a woman in a gigget for collecting unicorn dung in elflands. Nahme declared party not interfear in justice remembering guy they saved from hanging turned out to be a pig and the mob almost lynched the party. Into cliff road between moutains and evil swamp and canibal horde came after them. Easily out ran mob as they had a cliff to climb.

Saw some familiars meeting in woods and dark Elf sent his bat to talk with them and he got to share picknick. All too powerful to kidnap for ransom.

Found the old prehuman bridge above the waterfall into the swamp that crossed a great river but decided to check out a train off the road. Turned out was a village of escaped slaves and fugitives from the barrony. After awkward questions if the party were friends of Barron, the party (Nahme and acula are card carrying secret police informants), the guards fired arrows at party.

Nahme sprouted her wings and cast a light aura spell and the Dark Elf added extra illusionary FX. Guards stopped and spoke to party and let them in. Stayed in tavern and Bugbear dealt drugs, Nahme spoke to priests in shabby shrines and Accula tried to seduce the ugliest women he could find. His orc wife and follower offered to get him new brides in the monster kingdoms in the north. Next morning Nahme spoke to mayor and offered to bring aid to the shabby village and Mayor thought it very brave to help enemies of Barony. So she backed down a bit.

Party marched to bridge. Heard there was a dungeon inside and Dark Elf sent his bat inside to confirm. On bridge were 30 barony orcs and a captain with Barron's Banner. Acula spoke to them and they passed without a hitch.

Finaly in uncharted lands with only crude maps they entered the unknown.

Heard a distant battle and found a disciplined lawful orc army or  fighting a larger 900 strong irregular chaos orc army. Most party unimpressed but Acula wanted to help lawful orc (Barron's allies) vs the demon worshiping mob. He ran up and began sniping leaders. A squad were sent against him and Nahme's orc guard ran to help Acula and his orc bride Olga. Dark Elf and the octopus fired at charging orcs. Nahme sighed and joined in, putting up her Aura and charging the band after Acula.

Acula managed to snipe leaders of the chaos orcs and the Elf made a smoky moaning phantom menace the horde. Party efforts helped the lawful orcs route the chaos horde and party helped chase the demon orcs into the swamp to the south.  The orc chiefs spoke to party and offered to take to their king. The party orc maids were green skins, these orcs were jet skinned. Party agreed and marched forrrrr 3 days north without problems. In orc camp king gave them some minor magic weapons and 11 000 silver which Nahme couldn't be bothered with. Orc king offered to fight for party in future. he also offered to take them to the Sinkhole the Dark Elf crawled from when escaping the Underland.

Had crude map extended to include now sealed off giant land and beast men kingdom in the north.

After a few days feasting and rest they went with escort to the sinkhole. Octopus lad recruited a orc lad as a follower and others took some orcs as baggage handlers.
Posted by Konsumterra at Thursday, October 30, 2014