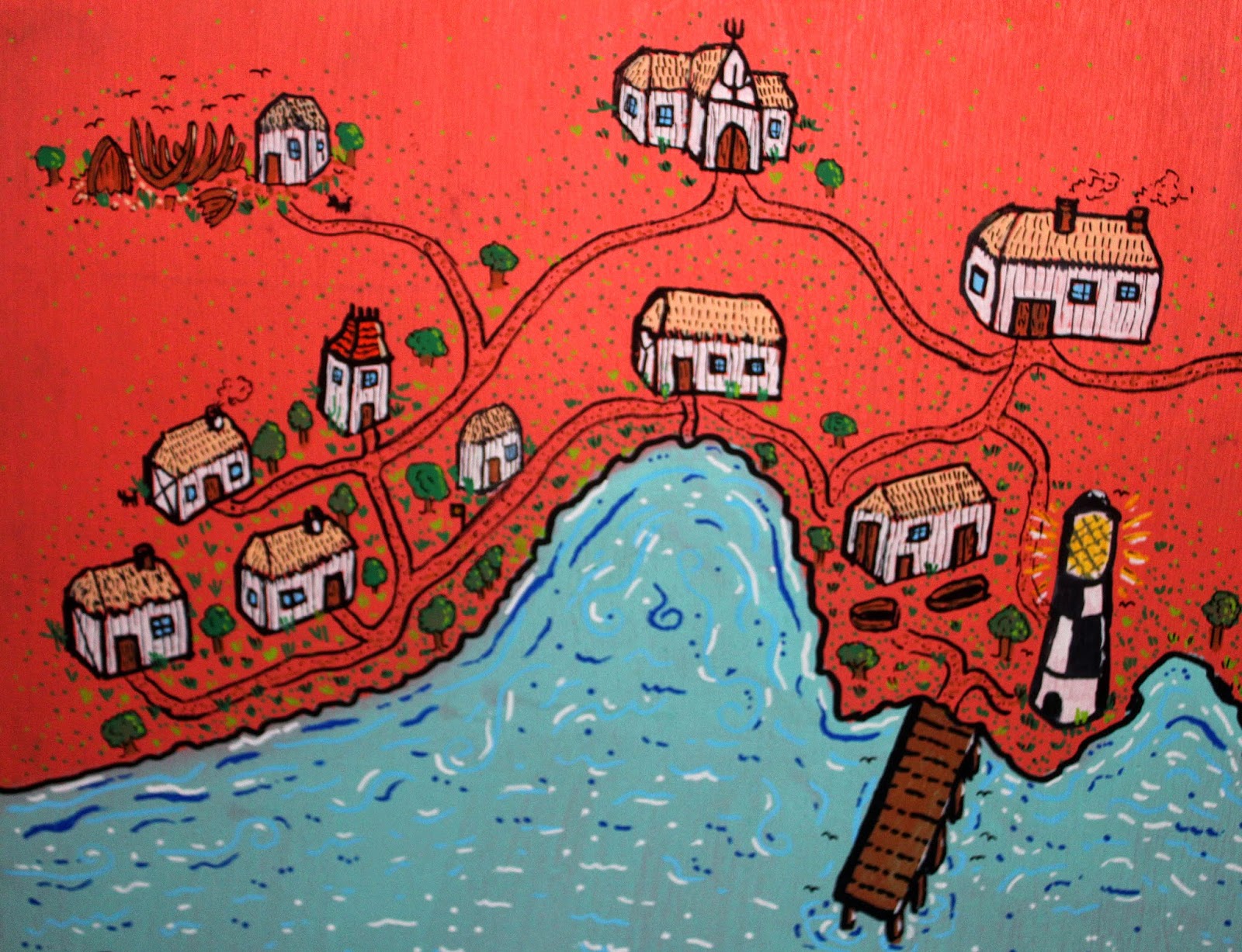 Top left junk yard - widows house with orange roof to left three houses to right is sheriff. Top middle church below is bait shop. Top right is pub, left below boat house, right lighthouse then warf. A bit blurry but 5am all nighter for me. Posca pen on house paint on board.

Mission
In the magical court of the western sea emperor the royal family of the Tako octopus fairies play eternally under the sea. But today the young uns did something bad. Playing for just a bit with the Sea Emperors magic weather control pearl, a dolphin with the pearl was harpooned and captured by fishermen. Now the royal kids have to get it back by dawn or the Emperor will notice and be very very very mad. He will probably demote you to janitors forever and take away your crowns.

Hopefully the humans will be friendly and return the treasure, and will sympathise with your plight. Surely they will see how adorable you are and cave in to you request just like your parents do every day. Then it is back to fun with your pets and candy and friends under the sea forever.

Keep track of village hostility with a chit here
When reaches 10, drag back to zero and a mob of 1d6 drunks from pub join the hunt
The track is to scare players really

Mob and Searcher Movements
Use a chit to record movements of any locals or mobs
They never leave the path
Stop at every door on route searching for trouble and avoid waking anybody
If they find a body, hear a scream or other disturbance see mob factor

It is not really a boardgame because the DM can place the treasure as required by game time or the last explored location.

each location has a first glimpse

Inside are buckets of fish eyes, piles of rusty hooks, old nets, reels, ropes, old sea chests, buckets of rotting chum, an old diving helmet, empty bottles in precarious stacks and a hammock behing the work bench. A collection of stinking aprons hang from hooks for when extra workers hired. Terribly made stuffed fish and albatrosses hang from the ceiling.

Many knives can be found here.

Ezekiel Jones the owner in the first three time boxes is gutting squid, after that he is in a drunken stupor unless he hears the clutter in his shop being disturbed. He delights in gutting all types of cephalapods and will hunt them down with his gutting knife and a bottle in other hand. He mutters crazily.

Boat Shed
A huge shed with huge doors and tiny windows locked at dusk and dawn. Various small boats, hanging nets, coils or rope and parts of old boats and anchors lay about the yard.

Inside are larger boats being built and repaired, wood shavings, logs and nails litter the floor. Badly carved figureheads of topless mermaid are on several boats.

Barney Squidguts is here smoking his supply of emerald seaweed and drinking. If he sees a octopus he will go beserk. His wife ran away years ago and he blames them for wooing her away. He is just mad.

Lighthouse
A black and white painted lighthouse here is in good working order but front door is securely bolted. Many tiny windows are on every floor. The light is on.

Inside is neat - a kitchen on groundfloor. A basement storehouse is full of whale oil and signal rockets. A store room then keepers lounge then bedrooms till the lamp house chamber.

Oil, storm lanterns and a few rockets and available here.

Old man Jibbergibbet is so drunk he thinks the gang are human children. He says he wont tell if they tell him a story for an hour. He will insist they tell another every hour turn but has a 50% chance of passing out each hour on the time track.

Warf
A dilapidated shaky barnacle covered warf where the fishing boats are tied.

A tint hut on warf where harbour master sleeps and drinks from sundown to sun up.

Coils of ropes, buckets of blood and chum and fish scales everywhere.

Crazy Jerimiah Titweazel drinks on an old crate, 50% chance of being in stupor in hours of darkness. If awakened he freaks that fish men or sea monsters invading. He is too drunk to chase anyone but might fight or scream.

The Pub - The Bloody Chumbucket
Large lively building with bustling mob of drunk sea men singing and dancing inside. A big sign says welcome. Another sign has a fisherman dancing with a tuna who's slit open stomach is spilling guts into a smiling bucket.

Several dozen men in the bar but numbers down to 12 after midnight. There is a dart board, a stuffed mermaid hangs from the roof. A nasty monkey lives here could be befriended if spoken to by right octopus.

There is as much booze and food in here as gang can carry. Bread and chunks of mutton and bbq squid on stcks are on plates. The kitchen is a mess and usually empty after twilight.

If they see horrible sea beasties or notice any disturbance 1d6 will arm themselves and go hunt with a torch 1d4 damage, or a dagger 1d4, or one in every group with a pitchfork.

The Church of the Briny Deep
From a distance the trident symbol might comfort the gang. Through the window a kindly old priest covers drunks with blankets with great tenderness.

Closer inside a frightening depiction of the Sea lord as a bearded human grimacing is over the bloody altar. Shockingly nothing like your grandpa the Sea Emperor. Statues of fish men hybrids line the walls. Stained glass of undersea scenes of drowned undead sailors are in back of church.

A collection tray of copper and a tin of buiscuits is inside,

The kindly priest will step onto the porch for a nip from his flask. If he sees a blasphemous octopi he will explode into rage and chase them screaming with his gold organic looking trident holy symbol. Ranting that the kids are the anti-squid come to defile the church and village women.

Sheriff's Office
A small hut with barred windows and a yellow painted star on a sign out front.

Inside their is a cell (where party could end up). A black powder cuboard, some nooses, a big axe in a chopping block and a locked trunk of confiscated daggers and clubs. In cell are manacles. The drunk sheriff if dark is asleep with feet on desk in a chair holding a blunderbuss with a key to everything hanging from his belt. If startled he might shoot, possibly his own feet.

The jumpy sheriff will shoot wildly then reload if possible. He will use as a club or use a dagger if that not an option. He hates no good no necked freaks. If he catches any of the gang he will try to hang them which is a dismal failure then watch them till dawn when posse will cut victim up for bait. Ever hour he watches has a 1in4 chance of passing out. Easily escaped by the octopi kids. A chance if startled will blow own head off.

HP 8 AC +13 (hard studded leather patchwork mess armour) Blunderbuss 2d4, Range 10 short 20 long can hit 1d3 close people for only 1d4 at long range but no hit penalty for range. Fire once every 3rd round. Has 10 shots on him and more in box. Also had d4 knife or d6 gun stock as a club.

Inside is a hoard of cats and a crazy witch widow. Convinced octopi out to ravish her sets 1d4 cats per octopi to attack. Lots of furniture and antiques under sheets and cobwebs. Doilies, china, silverware and a box of 100gp under her bed.

Lots of possible loot but dangerous. More cats crawl from under house. Has a trunk of gold and creepy dolls with pins in them modeled on local folk gang may recognize.

Old lady Cranmuffin has a crossbow 1d6 and hair pin 1d3 if anything gets closer. HP 2 AC +10
Cat HP 2 AC +12 bite claw for 1d2 - max of 4 cats per octopus in house. Cats hate octopi and a gang of 1d4 will prowl around streets hunting them if any left

Not much more to this place except the kids.A pig wanders around eating scraps

8 horrible kids HP 3 AC +10 will hunt octopi wit sticks for 1d3, one has a slingshot 1d2. They will try to catch an octopi and cut off all limbs then use as a soccerball. Luckily town hate them and noise from kids actually reduces the mob factor.

House 2 -Blind old Man
A run down messy house with open doors and spoiled food on benches. Old man in rocking chair. He may think those kids have come to torture him and scream but if treated well and fed nods off to sleep and gives helpers a silver coin each from inside his boot.

A fishwife is busy bashing octopi (possibly someone you know) against a stone sink and gutting, chopping and stuffing into jars of vinegar. A dozed gallon jars already filled in pantry and some dried fish. An old octopus in a cage awaits his sad fate, only survivor of a peace delegation that came here a week ago.

Some knives and a wooden mallet here in kitchen and remains of many octopi here.

Clarissa Thump hates octopi and longs to kill them. Her husband is in the pub, he knows better to be near here when she be a killin. Besides the fact they beg for mercy creeps him out. He drops a line with big jars with gold coin glued to the bottom then pulls line up and always gets a few greedy foolish octopi folk.

HP 6 AC +12 (thick apron, leathery skin) 1d4 cleaver or mallet or knife. She will throw a few if she cannot catch and will prowl the the town hunting them.

The old purple Tako octopus folk man (Uncly Diddly) is very grateful and could be a good follower if recruited on the spot. He now hates humans and gets a +1 hit and damage with any weapon vs them. HP 6 AC +2 (Dex)

Mostly garbage and crap here and a swarm or rats HP 5 AC +2 1d4 damage will attack any who bother their quivering nest mounds. Old man wont awaken even if stabbed, but dog very alert and hostile, will hunt around village looking for the gang. A still, many bottles or spirits and formaldehyde are her and very flamable.

Concluding the Adventure
Pearl I would put in last place looked cos that is where you always find stuff. A bucket of chum knocked over by accident when hope lost a good place. Perhaps a questioned human can misdirect them or help them. More about wasting time really. 3 hour game is the intent here. The church or the junkyard are good places too.
Posted by Konsumterra at Saturday, April 19, 2014