Cyborg Hunters of the Beaver King 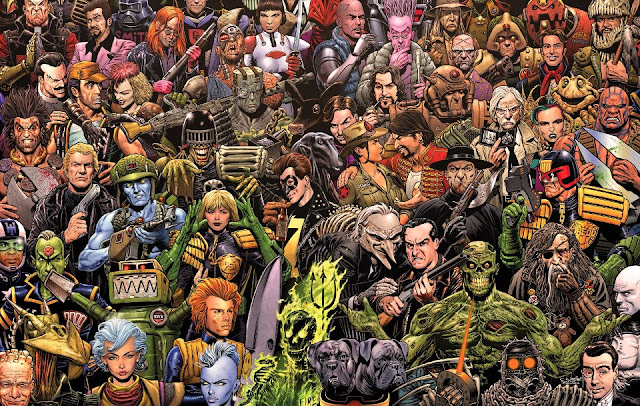 A few characters gathered in Beaver Dam and considered what to do. The forbidden airstrip seemed worth a visit only 4 miles down the duralloy road. So the came up to the razorwire electric fence and cut a hole. Crossing the manicured grass near an out building Amelia Airgut, lasered the door opened. The trio burst in and sealed the door while four sec bots approached with another bigger barrel shaped bot with 8 tentacles.

The dusty reception room had a service robot and a closed stationary cupboard. Inside was a mummy with a case full of ID and a type IV military contractor ID. Several offices with a suicide victim with gun, a man crushed by his massage chair and a map of the airstrip and companies controlling the airstrip. Next was a repair bay annex to roller door and lost baggage for a small rural airline. As the approached the stacks of bags, a security bot attacked proclaiming humans breaking law by being alive. A battle started and despite SMG and las fire easily stunned the party with 4 tentacles. The party were restrained while robot called for back up to interrogate party. Daves pocket laser got him free, while Rusty chewed his bonds and Amelia tried her best to use her vibro knife. They pounced and Dave just finished the bot with Amelia's dropped laser while the others were paralyzed again.

Searching the bags went for hours and when the found a portable xray scanner to speed things up. Eventually Dave had a pram load of suitcases. Amelia has a powered wheeled trolly fully laden and Rusty was on defense. They bolted for the fence and bots came out. Whith a struggle through clouds of tear gas the group broke out and fled home. Beaver land merchants were pleased and the party gained, batteries, laser pistol, gas mask, plastic armour and a grenade each. They got functional needler and teargas grenaides from the airport sec bot. Plus shiny new tracksuits and business suits of the ancients.

With a few days to recover they planned to go to the Barony of Horn past their home island on the way. Amelia recruited a blushing teen beaver named justin as a mechanic. Dave recruited two steampunk hillbillies - one a hunter named Abe the other Vern, a technician. Rusty recruited some ferals - a brown bear, a bobcat, a bitch from the local swamp.


In Amelia's balloon the party spotted a white robed man fighting a giant catfish from his teeny dingy. They pulled him up and he was a healer. On King island they landed at their old village and rested. Dave went to the Genetic Infantry bunker and they talked, the first person to have done so in decades. The party and militia set up camp at the Red Death bunker entry. They were surprised how run down the camp was with no guards. After last battle the evil gang had halved in numbers. Sneaking into the entry they saw several guards.

A crossbow holding guard called Pepsee stepped out to speak and the party lasered him down. As his comrades stepped out to return fire Dave grenaided them, driving back their croc-o-cow abomination on a chain named Glaarg. Harry a hopping rabbit man with a light semi auto kit rifle was hopping about firing his light but annoying weapon. Wendee Hotdog an ugly chamo skinned mutant woman tossed and missed with a poisoned javelin. Rusty's animal pals swarmed Wendee, while the rest gunned down Harry. Rusty's pets ate well. Creeping into the bunker deeps they began opening long sealed chambers with Amelia's force knife. The found a supply lab with a good stash of energy cells and parts. An AI room they sealed and left. A android vat and brain borg android controller. Amelia dialed up a brain android and resealed the room for a months time when ready. Found a shooting range with training bot that would reload their slug throwers and would lend them light slug guns for practice.   Ignored the biolab and the music room and opened up a vault of 750 frozen ancients. Resealed and moved on. Finally they crept through the hydro lab and garden into the leaders chambers from the rear. Amelia sneaked off and went a different way with plucky Justin.

Abe snuck ahead with a dagger and silent needler and stabbed an abomination with a silent kill stab. He tried the next sleeper while the gang of killers ate, and stabbed cyborg plasteeel and duraloy instead of yielding flesh. The cyborg awoke and screamed. Kolkut, a bullet headed grey mutant in riotgear and bat stepped into the sleepers room and Jack caught his eye. Amelia threw a grenaide right next to the main bandit leaders killing the metal clawed doctor and the mutant seer Scar as well as injured the rest. Dave and rusty hosed Kolkut with 9mm and lasers till he exploded. Kazra behind him returned laser fire. Khan Redhand with a Forceblade attacked Amelia and his wife with a chainsword went for Justin.  Falco a wounded bird head ran out the bunker to be killed by musket fire outside from the militia. Abe kept wrestling the cyborg who wasted more laser fire ineffectively. Amelia zapped the Khan and injured him enough to think twice and made him run. His wife went after him. Kazra fled too while a dog pile of followers trapped the cyborg and tore off his arm.

The bandits surviving fled outside and the khan went down in a volley of muskets. His angry wife was gunned down by Rusty's SMG and only Kazra escaped to possibly be rounded up later. Villagers happy that now only undead here a problem and the healer offers to revive the sleepers. They found the bandits had been eating from frozen animals and seed stock in the base cryovault. Villagers extracted the plans and home base for the legion of Gold from the cyborg. With some new grenades and weapons the gang wave goodby and flew to the Barony of Horn near Chi-Cargo deathlands. Met other members of the beaver special branch (rest of the party) in court. The Barron knighted the party and accepted their atomic cell as a gift towards loaning a them an aircar (for a moon mission for king beaver).

Combat went much faster. No original characters left. Followers big fun. Will run one more at bookshop and some extra missions at fortnightly home game. Two players absent. Good to use gang I designed 4 months ago. Free baked goods regular.

Next session - Legion of Gold and a trip to space

If i feel like it could take party to Oz on return.
Posted by Konsumterra at Sunday, March 03, 2013